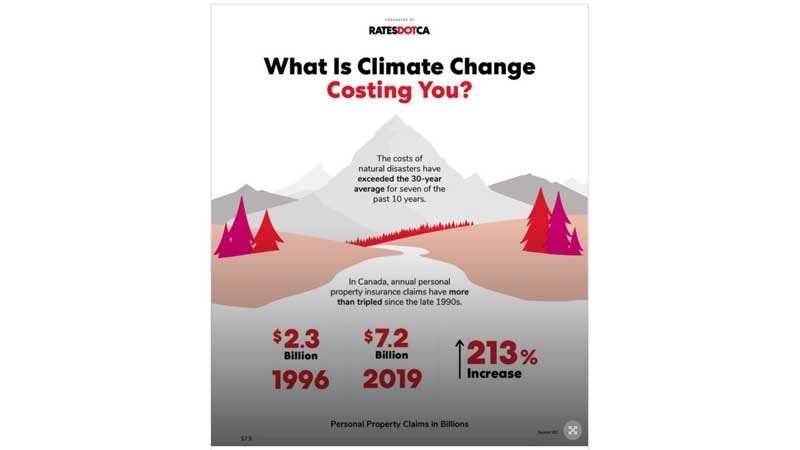 - Home insurance rates in Ontario and Alberta have grown at multiple times the rate of inflation over the past decade as personal property damage claims have grown 42 per cent nationwide over the same timeline. -

As climate change-related natural disasters accelerate in terms of both frequency and cost, Canadian homeowners are increasingly feeling the financial impact in their insurance premiums. According to new analysis from RATESDOTCA, the average cost of home insurance has grown at more than three times the rate of inflation over the past decade as personal property damage claims have grown 42 per cent nationwide over the same timeline*.

Growth in total property claims made through home insurance policies explains this trend. According to the Insurance Bureau of Canada, personal property claims nationwide have more than tripled since 1996, rising 213 per cent from $2.3-billion to nearly $7.2-billion. That is in line with global trends, as Australia's QBE Insurance Group said in its 2020 annual report, the economic cost of natural disasters has exceeded the 30-year average for seven of the past 10 years.

"Climate change is already having direct financial impact on individual Canadian homeowners," said Jameson Berkow, managing editor of RATESDOTCA. "Everyone should be motivated to take action on climate change, but this data should add even more incentive by putting a clear dollar value on the costs of inaction."

Homeowners can better protect themselves from the rising costs of climate change by checking their policy to ensure they are covered for any associated event that might occur.

Overland flooding insurance has been available in Canada since 2013 and according to the Institute for Catastrophic Loss Reduction, every homeowner should consider adding it to their policy even if they don't live in a floodplain.

Other tips to keep homes safe from extreme weather:

Installing a back water valve/sump pump in basements (telling an insurance provider about this could result in a discount)
Regularly cleaning gutters/pipes
Adjusting downspouts away from homes and onto the street
Clearing five feet of vegetation around a house, which can halve the risk of a home being destroyed by a wildfire
Using impact-resistant materials on roofs, especially in a hail zone
Avoiding planting coniferous trees, which are more flammable than deciduous trees
Getting water flooding coverage included in insurance policies (check with insurance provider since most require this to be purchased separately)
*Home insurance prices are based on RATESDOTCA data for policy transfers from 2011 through early 2021. The full dataset is included below for your reference. Personal property damage claims growth rate is based on Insurance Bureau of Canada (IBC) data from 2009 through 2019, the most recent ten-year period available.